The People’s Assembly has called a National Day of Action.

We’ll rally at the Cascade Steps (Harbourside) to say **STOP cuts to tax credits!**, NO to George Osborne’s Autumn Statement, END failed austerity & OUT with the nasty Tories! We demand a just and fair society!

There’ll be an **Open Mic** for your 1-liner statement on why George Osborne/the Tories are *discredited* (get it?) or why you want them OUT!

And we’ll have *George Osborne Piñatas* for you to pound until they pop!

Dependant on the weather, we’ll then head out on a short but vibrant anti-cuts parade through two other relevant locations centrally.

Bring anything glow-in-the-dark or lights/torches too!!!

It’s not going well for the Tories: they faced a humilliating defeat on their plans to cut Tax Credits, they’ve lost their credibility & public opinion is turing against them.

George Osborne will annouce his Autumn Statemant the day after this protest. They still plan to cut billions from the welfare bill, to privatise our services and to drive millions into poverty.

The People’s Assembly is calling a National Day of Action in opposition. Join us to say End Austerity Now.

Over 500 of us travelled on 10 Bristol coaches to the #EndAusterityNowDemo in June (a great contingent!) – let’s aim to multiply that for Manchester!

It’ll be the first day of the Tory Party Conference and we’ll march through the city centre in hundreds of thousands – filling the streets with noise and colour – to a defiant rally very close to the conference itself.

*** There will also be 3 more days of mass protest, public meetings, comedy/music gigs & occupations, outside the conference & around Manc., organised by the People’s Assembly – some have called it a ‘siege’! ***  TIMETABLE HERE.

We’d urge you to try to make the time available and join a good number of Bristol People’s Assembly activists who will be staying in Manchester until Wednesday evening.  There is a facebook for these ‘pledgers’ here: https://www.facebook.com/events/466053743574682/

*Indoor ACCOMMODATION* for thousands is being arranged by The People’s Assembly – BOOK here: http://www.thepeoplesassembly.org.uk/mancaccommodation

>>> Most coaches will return on Sunday 4th Oct around 5pm, but we may arrange transport for a return journey on Wednesday 7th October afternoon/early evening depending on the numbers who can stick around!

In light of the terrible situation surrounding the refugees fleeing Syria and inadequate response from David Cameron ; we are accepting only 4000 refugees whilst other european countries are accepting up to 80000.

We will be joining many other cities in the country by taking to the streets on Saturday at 12 noon. Please bring along family and friends as the more of us there are the bigger the impact.

If you have any banners or Placards do bring them along.

For those of you not familiar with Bristol The Fountains are next to the Harbourside in the city centre.

Following on from the massive, defiant and energised #EndAusterityNow Demo in London on Saturday – where more than 500 Bristolians joined the ~250,000 others – we are holding an Activists Meeting for those who want to be involved in organising the July 8th Protest against the Chancellor’s ‘Emergency Budget’!

More details of the event can be found on the Facebook event page (& on the Activity Diary – tab at the top of this page).

The event is open and accessible to all, so turn up and get involved!

*** Please INVITE all your Bristol friends ***

George Osborne, the chancellor, is to present his ’emergency budget’ on Wednesday 8 July, announcing the details of his £12 billion welfare cuts & more… The People’s Assembly Against Austerity has called a national day of protest across the country.

In BRISTOL we’ll assemble at The Fountains (directly next to the Harbourside) from 5:00pm for MASS DIE-INs there and at other locations (a moving protest), ending at College Green…

*** Please bring a placard or something else to hold/wear bearing the ‘Austerity Kills’ phrase or hashtag, but designed however you want! ***

All to highlight the many deaths and huge damage to millions of lives which continues to be caused by austerity and the cuts.

This is also the second budget in just four months & it begs the question what was Osborne hiding in his last?

It has been suggested by researchers that areas most likely to be hit in the budget include:

On Tuesday 30th all funding for the Independent Living Fund for Disabled people was also cut by the government.

Thousands of people are rising up against Tory austerity, not least in Bristol, as the inspiring protest organised by school students and our own public meetings and the recent Make Some Noise protest have shown.

Now our immediate task is to keep up that momentum by bringing together as many people as possible for the national #EndAusterityNow demo on Sat June 20th as well as for further local actions around Bristol.

We have lots to organise. From booking and co-ordinating coaches to get people to London for the demonstration in June through to stalls and leafleting and further local actions locally.

But as an entirely voluntary movement, we suffer severely with lack of funds. Hiring a PA system, booking meeting rooms and printing leaflets all cost money and we simply can’t do it without your help.

That is why we are launching an emergency appeal for funds. Whatever donation you can manage, however big or small, will make a huge difference and help us to mobilise maximum resistance against Tory austerity.

£20 pays for 50 posters to spread our message

£50 allows us to hire a venue for a public meeting

Please give what you can!

Here’s the plan… Let’s gather in our masses at 1pm at the Fountains for a spectacular & inclusive show of defiance to the latest vicious Tory cuts announced at the Queen’s Speech… We’ll see where the energy & our numbers take us!

>> MAKE SOME NOISE! We won’t be silenced by the Queen’s Speech! Bring your pots & pans, instruments, loudest chants & invite your favourite street bands (Samba anyone?) to join the throng!

>> Tell them what we stand for! Bring your home-made PLACARDS & BANNERS with messages of defiance against Tory cuts, austerity & crackdowns on our rights! Giant PROPS are also great… **Come along to our placard-making workshop 10.30am – 12.30pm Saturday before the protest at the PRSC Yard, 35 Jamaica St, Stokes Croft.**

>> Make a real ‘show’ of it! Some activists have already promised to come in startlingFANCY DRESS COSTUMES (optional) – think ‘Queens, Kings & PMs’ or ‘Dress Code: Establishment’!!

The Queen’s Speech is a medieval political ritual which only serves to casts a sheen of ‘respectability’ over the ruling government’s policies – in this case, the devastating continuation of Tory austerity.

This demands ridicule, and we’ll make a real show (for the media and all) of it!

… where we’ll discuss what action is possible for a broad and united movement against austerity as we set out to fight a new incarnation of the Tory government and their destructive agenda of cuts, privatisation, union-crackdowns and attacks on democratic freedoms!

We will be discussing action on both a local and national level.

You can also find out more about Bristol People’s Assembly, what action and campaigns we could undertake here in Bristol over the coming months, and how to get involved.

The Tories have won a slim majority in the election.

Labour, after running on an ‘austerity-lite’ card, with a nod to the crises in living standards/public services, managed to get only 30% of the vote (1.5% advance).

In contrast, votes for the SNP and Greens, campaigning on a forceful anti-austerity & social justice agenda, surged by 3% each (in contrast to Tory advance of less than 1%). UKIP made great gains in their share of the vote, but we all know what that is about.

This election was not a triumph for Tory austerity – it gave plenty of evidence of DEFIANCE.

The People’s Assembly and the many anti-cuts, public services and community campaigns across the country have been fighting hard against austerity and wanton destruction of our social systems for the past 5 years, with some successes and summoning mass support (50,000 demonstrating in London last summer for instance).

The question now is, how do we up our game?

How do we make it impossible for the Tories to push through their planned £30 billion in cuts, and how do we accelerate and grow the people’s movement for an alternative to austerity?

One thing’s for certain. We need to get more active and better organised than ever.

Tickets for our Coaches leaving from Bristol:

Get your TICKETS here now… http://bristolpqt.eventbrite.co.uk/

Can we save our NHS from privatisation? – What happened to social housing? – Why is there always money for war? – How does austerity affect minority groups in particular? – What’s the alternative to austerity? – Do strikes work? – What about tax avoidance? – How can we stop cuts?

At a time when poverty and inequality continue to rise, and all major parties remain committed to a programme of cuts and privatisation, join us at the People’s Question Time where we will be discussing how we organise for a fair, sustainable and more secure future!

Do you have a question for the panel? Submit one when you register for a chance to put it at the event.

There will also be contributions at the end of the event from local groups Protect our NHS, ACORN Bristol (Community Union) and others, letting you know about the great work they are doing fighting for the rights of ordinary people in the face of cuts and private-sector exploitation.

We are delighted to be able to host this event in the beautiful City Road Baptist Church – let’s fill its 500+ capacity to the rafters and raise the roof Bristol!! 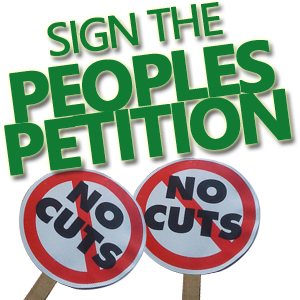